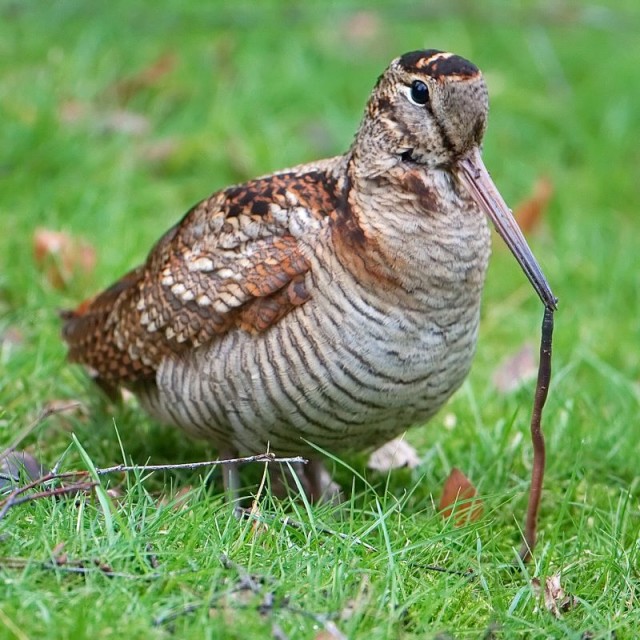 In the Azores archipelago the Woodcock (Scolopax rusticola) is considered a resident breeding species.

Description: Ground nesting in native woods. This wader is of the same family as the snipe, which it resembles. However, its size is closer to a Wood pigeon. Reddish-brown plumage provides perfect camouflage in its habitat. Long, straight beak around 7 cm, short tail and long rounded wings.

Its eyes are set far back on its head to give it 360-degree vision and it probes in the ground for food with its long, sensitive bill, making it vulnerable to cold weather when the ground remains frozen.

The male performs a courtship flight known as ‘roding’ at dusk in spring. When threatened, the female can carry chicks between her legs, in her claws or on her back while flying, though this is rarely witnessed.

Folklore: In the United Kingdom, the early arrival of migrant woodcock in autumn was said to mean a good harvest, especially if they stayed until spring. It used to be thought that Eurasian woodcock flew to the moon during the months when they were not seen and the first full moon in November, when large numbers arrive on the British coast, is sometimes described as the ‘woodcock moon.

Taxonomic Status: Monotypic species. The Azorean birds are very similar to those of continental Europe.

Conservation Status: Classified as Vulnerable on the island of Madeira and Data Deficient on the archipelago of the Azores in the Red Book of Vertebrates of Portugal. At the European level, classified as category SPEC 3 since European populations have generally shown a slight decline tendency in recent years.

The world population is estimated to be 14 million to 16 million birds.