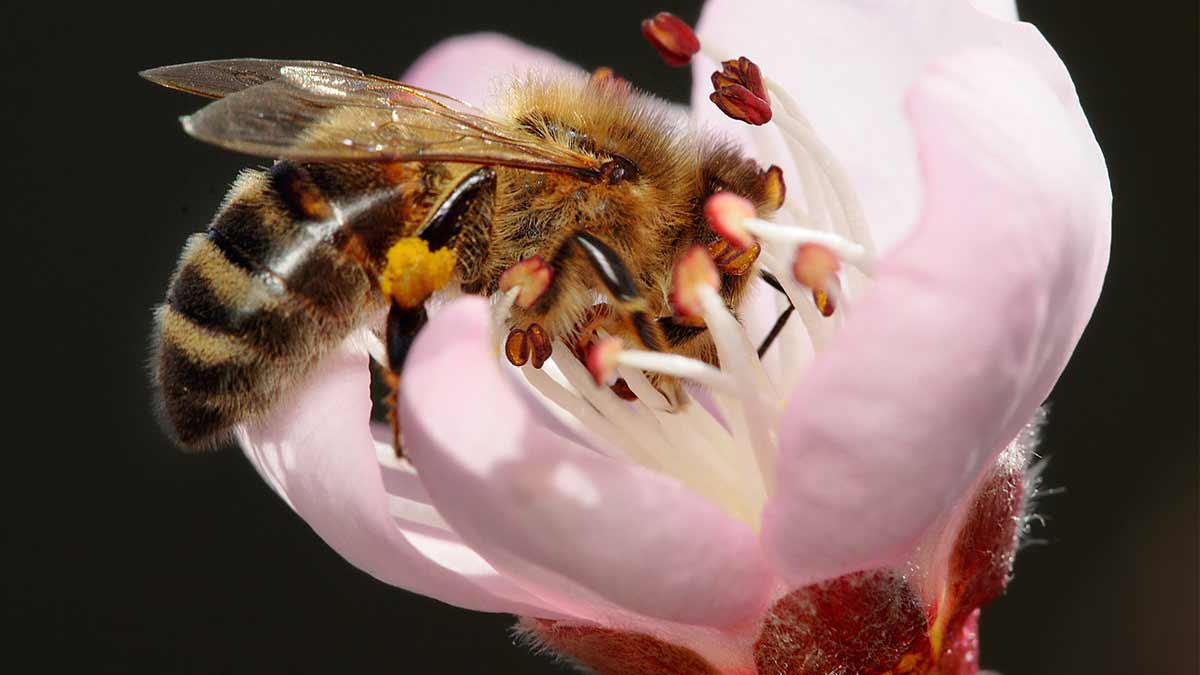 Honeybees are declining in drastic numbers worldwide at an alarming rate.

Their decline poses a threat to global agriculture and our precious food supply.

Why We Need Bees

If it weren’t for bees, many fruits and vegetables would never make it to market; of the 100 crop species which provide 90% of food worldwide, over 70% of these crops are bee-pollinated. In the United States alone, 1/3 of all the bites you take wouldn’t be possible without honeybees.

Honeybees are vital parts of our ecosystem, acting as highly efficient pollinators of our food crops and of wild flora. We need them to keep our crops and earth healthy, but in recent years their numbers have been decreasing by the billions. In addition to acting as a keystone species in our environment, beekeeping, honey production and honeybee pollination is worth about $14 billion annually in the United States.

Planet Bee Foundation: SAVE THE BEES!

Many crops, such as almonds, avocados, and apples, would not exist for us without pollination. Pollination is the process by which honeybees produce fruit and vegetables in plants by transporting pollen from one flower to another. As the bees gather nectar and pollen, their tiny hairs are coated in pollen, which falls into the next flower they stop and visit.

Considering the average honeybee can visit more than 2,000 flowers in one day, they greatly increase the chances of a plant producing a fruit or vegetable. While they pollinate, bees are also collecting pollen for themselves which they transport back to the hive, where it serves as the main source of protein in their diet and sometimes makes its way into their honey.

Entomologists are currently studying the reasons behind the enormous bee die-off happening worldwide. The phenomenon is called Colony Collapse Disorder (CCD), and is characterized by the sudden — overnight, in some cases — loss of the vast majority of the hive, leaving a queen, full brood (larvae) cells, and full honey stores behind. In collapsed hives, no dead bees are found — puzzling scientists and posing a major challenge to the study of the disease. The USDA has been studying the phenomenon since 2009, when it became apparent that Colony Collapse was not something that would disappear on its own.

Research on the possible causes of CCD is currently ongoing, and there has been progress! Most recent evidence points to a combination of factors as the culprit -– these factors include monoculture farming, pesticide and fungicide usage, and parasitism within the hive.

As the theory goes, farming in monocultures limits the bees’ diet to one type of pollen for extended periods of time. Think of it as if a human was limited to eating only strawberries for three months — not very healthy. These malnourished bees are more susceptible to chemical pesticides, which disorient them and further weaken their immune system. Weakened beehives are more vulnerable to parasitism and, consequently, collapse.

Pesticides and fungicides pose an alarming risk when we consider that pesticides (especially neonicotinoid types) when applied to young plants are retained in the pollen and nectar as they grow into adult plants. This means that honeybees are not only exposed to these chemicals while foraging, but also while eating the pollen and honey stores within their hives. Consistent exposure to a combination of pesticides and fungicides significantly alters a hive’s ability to fight off disease and parasites.

Despite the fact that bee-endangering pesticides are banned in the EU, the UK government just gave the go-ahead to farmers to sow these toxic-coated seeds anyway. Any day now, Bayer and Syngenta’s toxic bee-hurting seeds could be sown — wreaking even more havoc on our bees.

Instead of listening to us, the Government listened to the intensive farming industry –ignoring the growing evidence of how dangerous these chemicals are to bees and other pollinators.

Hundreds of thousands of people have already signed petitions to the UK Government to stop harming our bees, and they’re feeling the sting. A massive public outcry could force the government to back down and protect bees.

Sign the petition now to the UK Government: stop allowing our bees to die — uphold the pesticide ban!

Neonicotinoids or “neonics”, the world’s most widely used insecticide, were restricted in the EU in 2013 because they were found to be of ‘high acute risk’ to bees. They can still be used on some crops but not those that attract bees when they flower.

Serious scientific evidence shows that the nerve agents cause serious harm to bees – whose pollination is vital for many crops, and thus threaten our whole food supply.

This plan to sow UK fields with treated bee-harming seeds flies in the face of science and facts.

The Government gagged its own pesticide advisers to try and stop campaigners from piling pressure on the government — showing that they are terrified of a massive public outcry. They haven’t even seen the half.

Companies like Bayer and their associates have been trying to overturn the neonics ban in the EU for years – using lawsuits and intimidation tactics to try and get their way. But we’ve been there at every step, fighting hard to make sure our precious pollinators aren’t stamped out by corporate greed.

Let’s swarm the UK Government with signatures now and make sure they protect bees once and for all.

The most dangerous parasite threatening beehives currently is a mite with the descriptive name: Varroa destructor. Commonly known as Varroa mites, these parasites are the bane of a hive’s existence, infecting bees often before they can even emerge as adults. When a hive is already weakened, by pesticide exposure for example, a Varroa mite infestation can wipe it out. Other parasites involved in collapsing hives include the small hive beetle, Aethina tumida; Nosema spp., a gut parasite; Waxmoth, andGalleria mellonella.

Weakened immune systems leave hives susceptible to bacterial and viral diseases as well. Two of the most well known diseases to infect bees are American Foulbrood and Deformed Wing virus. American Foulbrood affects larvae less than a day old, preventing them from surviving until adulthood, while Deformed Wing Virus is transmitted through Varroa mites and prevents the bees from being able to fly.

PlanetBee are on ZomBee Watch

PlanetBee.org work with San Francisco State University on their ongoing study of Apocephalus borealis, the “Zombie Fly.” TheZomBeeWatch Project tries to pinpoint infected hives — the fly may be linked with CCD, so it’s important we get all the information we can. We support this research by bringing the ZomBeeWatch program to local schools and organizations we’re involved with; then, guiding them through participating in this citizen-driven research.

One of our interns even sampled honeybees on the Google campus! The “Zombie Fly” earned its name from its effect on honeybee behavior. The fly lies eggs within the bee, which hatch into larvae that control the bee’s flight patterns. These parasitized bees often leave the hive at night never to return and have earned the name ZomBees. Eventually, the ZomBee will die and little flies will emerge from its body. Scary!

Read about the ZomBees in our Google Campus hives in Scientific America.

(A) Adult female A. borealis.

(B) Female A. borealis ovipositing into the abdomen of a worker honey bee.

(C) Two final instar larvae of A. borealis exiting a honey bee worker at the junction of the head and thorax (red arrows).

The above is based on information from the Food and Agriculture Organization of the United Nations (FAO), Science Daily, the US Department of Agriculture and research by Illinois State University. To learn more about Colony Collapse Disorder, Zombees or other threats to honeybees keep up with the Planet Bee Blog for the latest news.

Special thanks to Alice Fung for sharing her photographs from the Alice Fong Yu Education Outside Blog.

A Critically Endangered Spider on The Azores