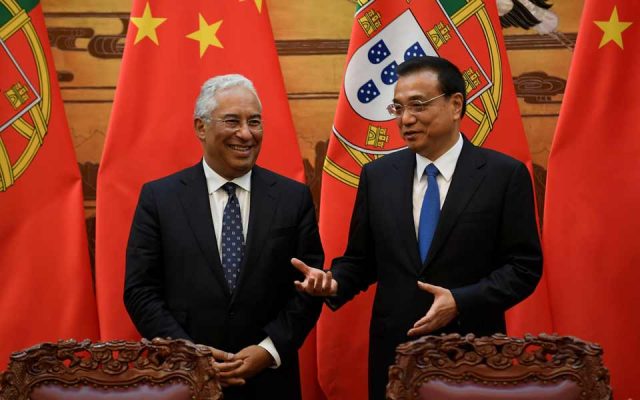 US presence in the Azores

Sometime shortly after the elections, both Deputy Secretary of Defense Bob Work and James Clapper, director of National Intelligence, will testify in Congress in regards to their decisions to draw down the US presence in the Azores, effectively ceding to the Chinese use of the strategic archipelago where the United States has had its premier mid-Atlantic base since World War II.

At issue is the Pentagon’s decision to locate a new Joint Intelligence Analysis Complex (JIAC) in the United Kingdom at the Royal Air Force (RAF) Base at Croughton. While Work had signed numerous letters to Congress saying that the Defense Department chose Croughton over Lajes Field in the Azores or any other candidate on the merits of both finances and infrastructure, documents have since emerged that suggest either Work or those operating underneath him lied: The Pentagon simply never considered any site outside the United Kingdom. Portugal, which owns the islands, is a NATO member. Portugal cannot simply condemn the local economy to disaster because of an arbitrary if not fraudulent US decision, however, and so has begun to scope out a Plan B.

Last month, the Chinese president led a large Chinese delegation to the Azores — including to Lajes Field itself — in order to further explore commercial options for Lajes Field and its nearby port. That marks the second official Chinese visit to Lajes and its environs in the last few years. Meanwhile, Portugal’s socialist Prime Minister Antonio Costa earlier this month traveled to Beijing to meet with Chinese officials. Costa has downplayed the potential motivation of Chinese investment:

Let’s be clear: The Chinese government has absolutely no interest in conducting scientific research on the Azores, nor are the Chinese teams visiting the island engaged in research. Beijing would never talk about a permanent military base, but it would rebuild the local port to its military specifications (just as it did with Gwadar, Pakistan) and it would be happy to station a skeleton crew at Lajes itself. If the United States has no presence at the base, then in a time of tension now or in the future there would be absolutely nothing stopping the Chinese from simply landing an air wing. NATO or not, it is unrealistic that the Pentagon would respond by invading the Azores, especially with the size and readiness of the US Navy as eroded as it has become over the past decade.

Add into the mix recent Russian aggressiveness, for example, sending warships into the English Channel. Iran, too, has said it plans to send its ships into the Atlantic Ocean in the near future.

A decade ago, the Eastern Mediterranean was quiet. Today, it has become the new Persian Gulf with a permanent Russian presence, a confidant of Turkish President Recep Tayyip Erdoğan threatening to attack US commercial vessels working in Cypriot waters, and Hezbollah attempting underwater sabotage.

The Atlantic Ocean, too, since the end of the Cold War has merely been waters to sail through on the way to the Fifth Fleet area of operations. No longer. And that Work and Clapper would knowingly cede the US strategic position and infrastructure against the backdrop of America’s top three adversaries seeking to fill the gap is worthy of congressional attention. That their abandonment of Lajes Airfield on the island of Terceira and the decision to invest more than a billion dollars more in southern England come against the backdrop of apparent Pentagon fraud should raise further outrage and perhaps even merit more than simple political consequences.

The only silver lining on the story is that their appearance will occur after the elections. Neither Work nor Clapper need fear embarrassing the administration in a way that might impact voters. With the Obama administration entering its final weeks, they might come clean in order to enable those that come after to rectify the problem and stop the strategic slide.

Never before has there been a more appropriate time to have US presence in the Azores.