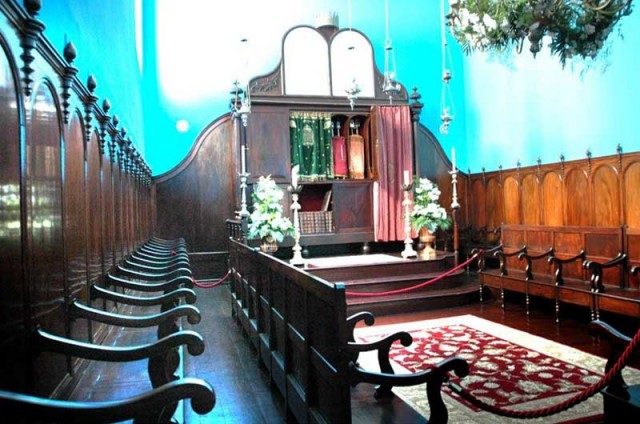 PONTA DELGADA, Azores — Outside, the setting of the sun was at 8:26 on this Friday night, April 24, in the city of Portugal’s oldest synagogue.

Inside, about that time, the Jewish service leader of Sahar Hassamain, or “Gates of Heaven,” walked a few dark wooden stairs up to the bimah in the restored sanctuary, wore a yarmulke and draped a wide tallis across his shoulders.

Gideon Gradman, president of the Massachusetts-based Azorean-Jewish Heritage Foundation, looked upon his congregation of roughly 40 people, perhaps half of them Jewish, all of them devoted to this historic event.

In one row, a Catholic man, Nuno Gomes, secretary of the Friends of the Ponta Delgada Synagogue, sat with his wife, Rachel, and their children, Nuno, 11, and Isabel, 9. The bright-eyed children sat quietly to learn about another religious culture, and afterward asked many questions about the customs, the father said.

This was the first known Jewish service in the Azores in nearly 60 years. It was held inside the hidden shul of a rabbi’s home, founded in 1836 in the aftermath of three centuries of the Portuguese Inquisition’s religious persecution, after the return of communities of Jews to the Azores.

Moments later, Gradman’s mother, Temina, joined him on the bimah to light two large individual candles, closing her eyes while reciting the Hebrew blessing, welcoming in the Sabbath and returning this lost tradition.

Led by Gradman, those who knew or could read the Hebrew words sang songs and psalms, most in praise of “Hasham,” one of Judaism’s words for God. Sometimes he asked the congregation to read responsively in English.

With a donation to the AJHF from Massachusetts’ former state treasurer Scott Grossman and his wife, the congregants had 50 of the new Artscroll prayer books or Siddurs, with Hebrew-English translation. In the future they hope to buy and donate Hebrew-Portuguese texts.

“Presented on April 23, 2015, on the occasion of the rededication of the synagogue. May it be used in good health for generations to come,” read each prayer book inscription.

Carol Schwartz of Tiverton, after the landmark synagogue service, said, “I hope it gets used a little” in Ponta Delgada, even though there are no practicing Jews in the city.

“I have an 8-year-old grandson (in Medford). … It would be a very nice place for him to be bar mitzvahed,” said Schwartz, the wife of Dr. Ronald Schwartz, whose long practiced in Fall River.

The well-traveled physician, in his praise of the historic events to a leader of the inauguration trip to Ponta Delgada, had said, “Where in the world could people get so excited about the opening of a synagogue with all that’s happening in the world today?”

Like many on this five-day trip from Boston to Ponta Delgada, Schwartz said the experience and memories far exceeded his expectations.

The day before the service, inside this intimate sanctuary and outside under a white tent with red carpeting on Rua do Brum, about 300 people witnessed the rededication of Sahar Hassamain Synagogue, Ponta Delgada.

“You know what I thought? We were the first to use those prayer books. It was really a privilege to be there,” said Elsie Dias, one of three Fall River Catholic women sitting together with family heritage to the island.

Dias traveled and sat at the Jewish services with her sister-in-law, Julie Rodrigues, who emigrated from her native island as a girl.

Many Portuguese Catholics in the Azores believe they have Jewish lineage as a result of Jews converting, assimilating by marriage and fleeing after the Inquisition in Portugal began in the early 16th century. Studies in the past decade have linked 13.4 percent of Azoreans to Jewish ancestors through DNA testing.

Dias found out about six weeks ago — after booking the trip — that is likely the case with her. Her daughter needed medical testing, which showed Jewish ancestry on her mother’s and father’s side, Dias said. She’s a cousin of Fall River state Rep. Alan Silvia, who was also on the trip.

At this celebratory Friday night service, Gradman would tell of an explanation for the origin of the synagogue’s name, translated from the Hebrew to “Gates of Heaven.”

The Book of Genesis, Chapter 28, relates the story of Jacob’s dream. In it, one of the three fathers of the Jewish religion after Abraham and Isaac, dreams of a ladder between heaven and earth, and when he wakes up says, “I’m in a holy place, and I didn’t even know. And he says, ‘This is a House of God. This is heaven,’” Gradman related.

He likened this synagogue, the “Gates of Heaven,” similarly being hidden for many decades, dating back nearly two centuries.

Inside the sanctuary of rich wood, arching windows and ceiling, an ark with two preserved torahs draped by restored velvet coverings and the Ten Commandments in Hebrew above them, there are 67 built-in wooden seats.

One in particular is memorable for Jorge Alberto Delmar Soares of Ponta Delgada.

Now 68 years old, Delmar Soares was the keeper of this synagogue from his uncle and his grandfather before him. He is Jewish though he does not practice, with a Catholic wife and children. Delmar Soares did not sit right away.

Along the far side of the inner row, he chose the fourth seat, several congregants would say afterward. It was where Salomaô Delmar, his grandfather, had sat. His grandfather died in 1954, and was the last Jew from this Orthodox synagogue to pray as part of the required 10 Jewish adult men to form a minyan to say prayers.

Gradman conducted this service as informal and inclusive, and women did not sit in the balcony as they would in the Orthodox tradition.

His girlfriend, Ella Hoffman from Washington, D.C. — who has one Jewish parent, her father, Paul, also with them — said she was touched when she saw how Delmar Soares chose his seat. She called it a “sweet moment.”

In the past 20 to 30 years, the last two practicing Jews in the Azores died, Delmar Soares’ said. They were his uncle, Salmon Delmar, and Elias Sebag. His uncle would later pray alone, on Yom Kippur, the Jewish High Holy Day.

At one point during the service, Delmar Soares, who with a Jewish mother says he remains the sole surviving Jew though he does not practice, stood by himself in the back. He leaned against the wooden sanctuary spindles.

He said what he had been thinking. “To me, I remember just a few things from more than 50 years ago, and some sounds. I don’t remember anything else,” he said, softly adding, “I was a small boy at the time.”

If there was any sadness in the synagogue, many times over the chanting and singing surmounted it, voices joining in with prayers familiar to some in melodic Hebrew tones.

Soon it was a few minutes after 9 p.m. The final chant to close the evening service, which includes bending the knee and bowing the head, was the prayer, “Aleinu,” praising God.

Dr. Ronald Schneider of Somerset, who sat next to Delmar Soares at the service, responded similarly. “Hearing the echoes of those songs, it was like there was a choir behind us,” he said happily.

His wife Ada, who read a psalm from the bimah, said their participation gave her “goose bumps.”

Whale Heritage Sites to be designated around the world