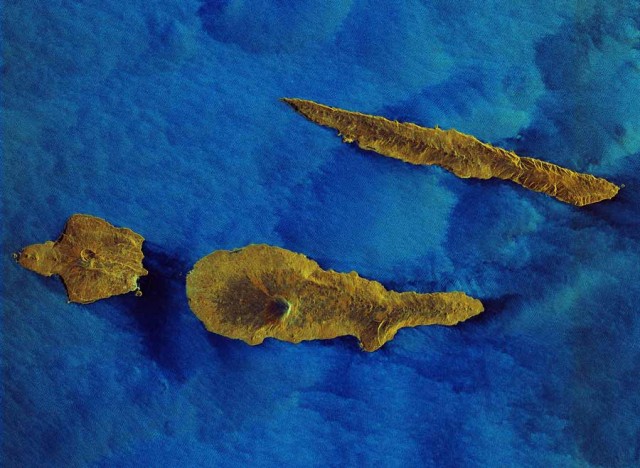 This Sentinel-1A radar image was processed to depict water in blue and land in earthen colours. It features some of the Azore islands about 1600 km west of Lisbon, including the turtle-shaped Faial, the dagger-like Sao Jorge and Pico Island, with Mount Pico reaching over 2351 m in height.

The image highlights the differences in the relief of the islands, with volcanoes and mountains clearly standing out.

Faial is part of the central group of the Azores. The surface area covers 173 sq km. It has some 15 000 inhabitants and its main municipal seat is the city of Horta. Different shades of blue decorate the houses, which divide the fields and line the roads, giving Faial the name ‘Blue Island’.

In the 18th century, the development of whale hunting brought whaling fleets to Horta. By the 19th century, Horta had become an important seaport and a layover for a large number of yachts crossing the Atlantic.

Along with other islands in the archipelago, Faial is of volcanic origin. In 1957, a big eruption about 1 km from the coast ejected large quantities of lava and ash, forming an islet that later became connected to Faial island by an isthmus.

Unique among the islands of Azores, São Jorge is uncharacteristically long and slender, and so susceptible to ocean erosion.

The island is 55 km in length, with a mountain range forming its backbone. At 1053 m, Pico da Esperança is its highest peak. The island has an area of 246 sq km, with an obvious difference in the relief between the western and eastern sections: the western coast is lined with cliffs, while the east is smoother. Similarly, the northern coast has sharp cliffs, while the southern side is less inclined.

The island’s 9500 residents have lived in relative isolation for many years. Disturbed only by seldom visits from the authorities, commercial boats from the local islands, or the occasional aristocrat who comes to contemplate the local scenery, life on São Jorge is very relaxed.

However, with the inauguration of its ports and the airport in 1982, commercial ventures have grown, especially exporting local cheese, animal husbandry, fisheries and a small craft industries.

Named after its imposing mountain, Pico Island is one of the most beautiful and underrated islands of the Azores. Its history was forged on whaling and wines. The famous Pico wines and the UNESCO world patrimony designated vineyards, as well as wooden boat building, are contemporary features of Pico.

Whale hunting gave way to a movement of study and observation of whales, dolphins and other sea mammals. Since volcanic eruptions ended 300 years ago, Pico is considered dormant, adding to the island’s mystery and making it a magnet for scientists.

Sentinel-1A has been in orbit since April 2014, monitoring the marine environment and mapping water and soil surfaces, among other major applications.

This image, also featured on the Earth from Space video programme, was captured on 16 March.