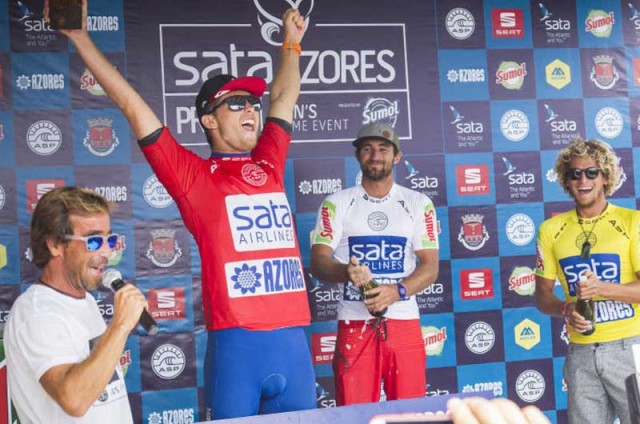 THE LOCATION:
Sao Miguel is one of nine islands of the Azores archipelago, the biggest and most populated. Lush green hills and massive cliffs drop into the wild Atlantic ocean.

THE HISTORY:
The annual SATA Airlines Azores Pro brings some of the world’s best surfers to the iconic Santa Barbara beach since 2009. The event has seen its share of drama in the ever-important qualifying points race and delivered a few epic sessions in pumping waves.

THE WAVE:
Located on the North shore of Sao Miguel, Santa Barbara is a secluded black-sand beach producing powerful surf. Several peaks break along the beach with the main two sitting at both extremities.

The seventh edition of the QS10,000 SATA Azores Pro is set to host the world’s best QS Top 100 surfers in the iconic Atlantic archipelago from September 22-27, 2015. Part of an elite 9-event QS10,000 leg worldwide, the event will once again play a major role in the qualification races of surfers looking to book a ticket for the coveted Samsung Galaxy Championship Tour.

“I’m very glad to organize once again the Sata Azores Pro,” Rodrigo Heredia, event organizer stated. “With all the effort and the major support of the Azores Government, we can once again have a QS10.000 in Azores with the best surfers in the world, surfing a back to back QS10.000 in Portugal, Azores and mainland.”

Often blessed with beautiful conditions, Santa Barbara has seen its fair share of flawless surf and the punchy, round lefts and rights are the perfect canvas for high-performance surfing. Last year’s winner Jesse Mendes (BRA) 22, proved consistent both in the clean barrels of the first two days of competition and on the playful peaks when big progressive maneuvers were rewarded.

“The SATA Azores Pro has established itself on the international WSL Qualifying Series calendar and will once again unite an incredible field of international surfers,” Rob Gunning, WSL European Tour Manager said. “Entering the final stage of the season, this event will be crucial for the athletes qualification hopes and with the excellent wave quality, weather and fans on the beach we are looking at yet another fantastic SATA Azores Pro.”

For the third consecutive year, the Portuguese Waves Series – Cascais Trophy will consist of the SATA Azores Pro, the Cascais Billabong Pro and the Moche Rip Curl Pro Portugal, and reward the most consistent surfer in Portuguese waters. Past winners of the series include Australian powerhouse Adam Melling who made the finals in Azores in 2013, and South Africa’s Jordy Smith who claimed his title with a runner-up finish in Peniche last year.