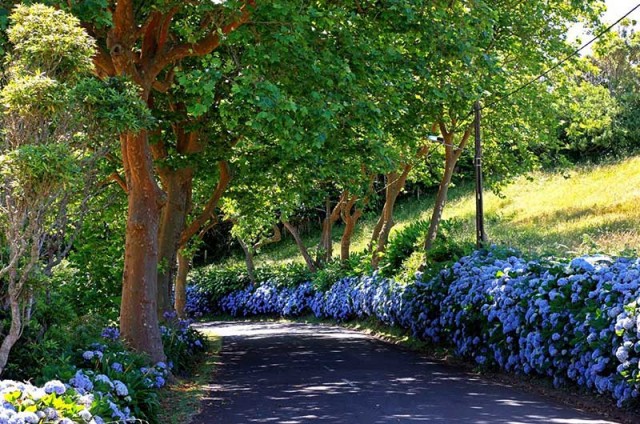 Hortensia is a common name for the Hydrangea genus of flowering plants.

Hydrangea (common names hydrangea or hortensia) is a genus of 70–75 species of flowering plants native to southern and eastern Asia (China, Japan, Korea, the Himalayas, and Indonesia) and the Americas. By far the greatest species diversity is in eastern Asia, notably China, Japan, and Korea. Most are shrubs 1 to 3 meters tall, but some are small trees, and others lianas reaching up to 30 m (98 ft) by climbing up trees. They can be either deciduous or evergreen, though the widely cultivated temperate species are all deciduous.

Having been introduced to the Azores, Hydrangea macrophylla is now very common, particularly on Faial.

There are two flower arrangements in hydrangeas. Mophead flowers are large round flowerheads resembling pom-poms or, as the name implies, the head of a mop. In contrast, lacecap flowers bear round, flat flowerheads with a center core of subdued, fertile flowers surrounded by outer rings of showy, sterile flowers. The flowers of some rhododendrons can appear similar to those of some hydrangeas, but Rhododendron (including azalea) is in a different order.

Hydrangea flowers are produced from early spring to late autumn; they grow in flowerheads (corymbs or panicles) at the ends of the stems. In many species, the flowerheads contain two types of flowers, small fertile flowers in the middle of the flowerhead, and large, sterile bract-like flowers in a ring around the edge of each flowerhead. Other species have all the flowers sterile and of the same size.

In most species the flowers are white, but in some species (notably Hydrangea macrophylla), can be blue, red, pink, light purple, or dark purple. In these species the color is affected by soil pH. For Hydrangea macrophylla and Hydrangea serrata cultivars, the flower color can be determined by the relative acidity of the soil: an acidic soil (pH below 7), by the influence of sundry agents in the soil, such as alum or iron, will usually produce flower color closer to blue, whereas an alkaline soil (pH above 7) will produce pinker flowers. This is caused by a color change of the flower pigments in the presence of aluminium ions which can be taken up into hyperaccumulating plants.