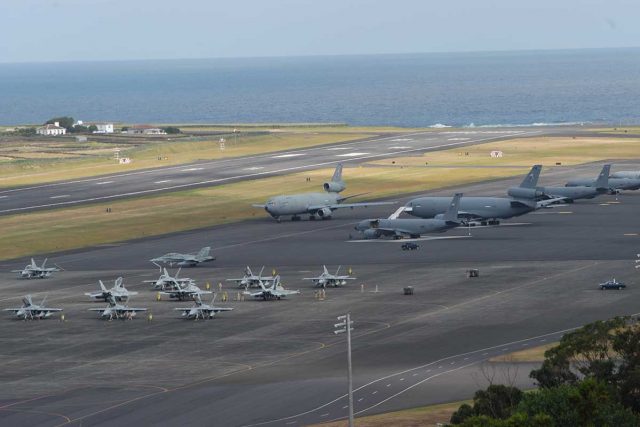 A strategic archipelago in the mid-Atlantic. A year ago, the base was already a ghost town. After US taxpayers had spent millions of dollars on housing, schools, and other critical infrastructure, most laid vacant.

The decision to withdraw forces from Lajes is a strange one, not only because the USA has pressed the base into service during every major crisis since World War II, but also because the Chinese are salivating at the opportunity to fill the void and establish themselves in the Atlantic Ocean should White House politicians and Pentagon strategists actually go through with their plans to abandon the field.

That the United States closed the Naval Air Station Keflavik in Iceland a decade ago against the backdrop of Russian President Vladimir Putin’s augmentation of Russia’s nuclear submarines and their growing aggressiveness in the North Atlantic only makes the Pentagon’s apparent decision to walk away from the Azores even more perplexing, given its logistical importance in anti-submarine warfare.

Against the backdrop of the verdict to shutter much of Lajes is the Pentagon’s decision to locate a new Joint Intelligence Analysis Complex (JIAC) in the United Kingdom at the Royal Air Force (RAF) Base at Croughton, just north of Oxford and a relatively quick ride to London.

Given the existing infrastructure at Lajes — not only facilities but also undersea cables — as well as the Azores’ central location for doing business across time zones and the cheap cost of living in the Azores, the Pentagon’s decision to locate hundreds of men, women, and children outside of London was curious. This got the attention of some in Congress, most notably Rep. Devin Nunes (R-Calif.), who subsequently assumed the chairmanship of the House Intelligence Committee. He and Rep. Mac Thornberry (R-Texas), chairman of the House Armed Services Committee, asked the Defense Department for its justification. After all, more than a billion dollars in taxpayer money could be at stake over the next several years.

After much delay, the Pentagon responded that they had a process and that they had simply judged RAF Croughton to be cheaper and better suited. Their assessment, however, was both superficial and wrong on a number of issues such as the facilities and infrastructure available at Lajes, as well as the differential in the cost-of-living between Lajes and London. Simply put, the numbers offered by the Pentagon to Congress appear to have been fabricated.

Murmurings from the defense bureaucracy and within the intelligence community further suggested the decision was based more on the desire of their employees to live near London rather than in the middle of the Atlantic. Whistleblowers reportedly emerged undercutting the answers to Congress offered both by Deputy Secretary of Defense Robert Work and former senior officials of US European Command. They repeatedly insisted they had assessed Lajes and found it lacking on both financial and technical grounds. Nunes subsequently called for the Pentagon Inspector General to look into the matter. In April 2016, not only Nunes and Thornberry, but also Oversight Committee Chairman Jason Chaffetz (R-Utah) and Veterans Affairs Committee Chairman Jeff Miller (R-Fla.) signed a letter calling for an investigation. Rather than address legitimate question, through it all the Pentagon bureaucracy circled the wagons and lashed out—a number of stories appeared questioning Nunes’ motives and understanding of the issue.

Now, if the murmurings out of the Pentagon are true, it seems that documents have emerged showing that Defense officials never actually considered the Azores or, indeed, any location outside the United Kingdom. That means that senior Pentagon and US military officials issued a number of letters to Congress that were not only misleading, but absolutely false.

It’s time for Secretary of Defense Ashton Carter and Deputy Secretary of Defense Bob Work to get serious. They may or may not have been aware that under their watch, the Defense Department actively and repeatedly lied to Congress in official correspondence. Nor did they necessarily know all the details of a decision process that preceded Carter’s tenure. If they were not aware, however, that suggests the civilian bureaucracy has run amok, making national security decisions not on the basis of geostrategy or fiscal prudence, but rather criteria as mundane as whether families can get tickets to West End shows or collect higher per diems.

If senior Pentagon officials were aware, however, that they were passing false information to Congress, then they presided over a campaign to lie to Congress and apparently to vilify the representative who first raised questions. Either way, it is essential now to determine formally and under oath how it was that the Pentagon passed apparently fraudulent reports to Congressional committees charged with oversight and repeatedly falsely insisted that decisions were made upon a criteria that they had never applied. It is also essential to freeze further construction at Croughton so as not to compound what very well may be a fraud emanating from within the Defense Department.

The Washington press may be consumed with the he said, she said of election season, but fraud in the JIAC decision should be a bipartisan concern whose reverberations go far beyond one center. Secretary Carter, call your office. What started on the rocky shores of the Azores may soon fall like a rockslide upon your department.