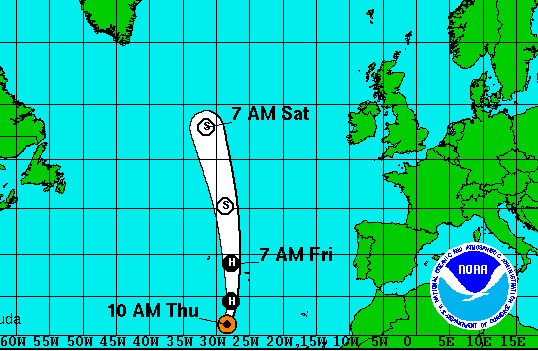 History spun up over the far reaches of the Northeast Atlantic on Thursday, as Subtropical Storm Alex carved out a distinct eye within a core of intense thunderstorms, making it Hurricane Alex.

The 10 am EST advisory from the National Hurricane Center put Alex’s sustained winds at 85 mph. Alex was located about 500 miles south of Faial Island in the Azores, moving north-northeast at 20 mph. A hurricane warning is in effect for the islands of Faial, Pico, Sao Jorge, Graciosa, and Terceira in the central Azores. Given the strong steering currents driving Alex, there is high confidence that at least some of the central Azores will experience tropical storm or hurricane-force wind, heavy rain, and high surf. To get a hurricane making landfall in the Azores any time of year is quite unusual(about once per 10-20 years); to get a landfall in January would be truly remarkable.

In records going back to 1851, only two hurricanes are known to have prowled the Atlantic during the month of January: an unnamed tropical storm that became Hurricane One on January 4, 1938, and Hurricane Alice, which maintained hurricane strength from December 31, 1954, to January 4, 1955. Alice topped out at 80 mph, so Alex is officially the strongest January hurricane on record in the Atlantic. Much like Alice, another tropical cyclone–Tropical Storm Zeta of 2005/06–formed in December and extended into January, and a tropical storm was recorded in early January 1951. There was also a subtropical storm in January 1978.

A chilly hurricane
Designated a subtropical storm on Wednesday, Alex took on a surprisingly healthy structure overnight, with a symmetric core of showers and thunderstorms around its clear-cut eye. Sea-surface temperatures beneath Alex are only around 20-22°C (68-72°F). Although these are up to 1°C above average for this time of year, they are far cooler than usually required for tropical cyclone development. However, upper-level temperatures near Alex are unusually cold for the latitude, which means that instability–driven by the contrast between warm, moist lower levels and cold, drier upper levels–is higher than it would otherwise be. That instability allowed showers and thunderstorms to blossom and consolidate, strengthening the warm core that makes Alex a hurricane as opposed to an extratropical or subtropical storm.

Alex’s unusual life as a January hurricane will be a short one. The system is already accelerating northward ahead of a strong upper-level trough, and by late Friday it should be a powerful post-tropical low racing toward Greenland. Even though Alex will become absorbed in the higher-latitude storm system, its warm, moist air may assist in pushing temperatures over parts of Greenland more than 35°F above average this weekend into early next week.

Hurricane Pali weakens to a tropical depression near equator
Late Wednesday was the first time in the modern era of tropical cyclone observing and prediction that we had simultaneous named systems in January in the Atlantic (Alex) and Central Pacific (Pali)–or, for that matter, anywhere in the Pacific. Pali is the earliest named storm and earliest hurricane on record between the International Date Line and the Americas. It reached Category 2 strength (85 knots or 100 mph) on Tuesday. While Alex was strengthening into a hurricane on Wednesday night, Pali was falling apart. By Thursday morning, Pali had decayed into Tropical Depression Pali, located at 173.0°W and just 2.5°N. Now experiencing moderate to strong wind shear, Pali should be history within the next few hours. Very few tropical cyclones have made it as close to the equator as Pali, since they normally rely on the Corilis force (which is stronger at higher latitudes) to give them a cyclonic spin. Only two other tropical cyclones have been known to make it within 2° latitude of the equator. When it formed south of 5°N latitude on January 7, Pali became the first tropical cyclone known to have existed in any of the equatorial regions used to monitor El Niño sea-surface conditions.

Which year should Alex and Pali belong to?
One might argue that Alex and Pali are actually straggler storms from the 2015 Atlantic and Central Pacific seasons, rather than the first storms of 2016. Tropical sea-surface temperatures north of the equator typically bottom out around March, so there might be some physical rationale for defining the Central/Northeast Pacific and Atlantic hurricane “years” as being from March 1 to February 28/29. In practice, though, there are very few tropical cyclones in January and February, so in most years this switch would make no difference, and it could foster public confusion. There is a much stronger physical rationale for the practice of straddling hurricane seasons across calendar years in the Southern Hemisphere, where summer arrives in late December and cyclones often form before January 1.

Hurricane Alice from 1954-55 is an interesting case in itself. It was originally recognized as a hurricane and named Alice on January 2, 1955. At that point, the same lists were being used from year to year, and there had already been a deadly Hurricane Alice in June 1954. However, post-storm analysis determined that the latter Alice had been a hurricane on December 31, 1954 -which makes 1954 the Atlantic’s only year that has two hurricanes with the same name.