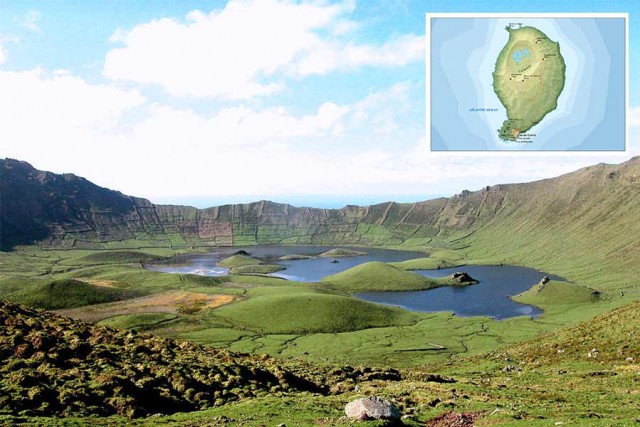 Corvo Island (Portuguese: Ilha do Corvo), literally the Island of the Crow, is the smallest and the northernmost island of the Azores archipelago with a population of approximately 430 inhabitants constituting the smallest single municipality in Azores and in Portugal.

Sheer cliffs dominate the coastal areas, the exception being along the southern margin which is composed of ancient lava flows. The western cliffs, with an almost vertical slope rises 700 meters above sea level; one of the major coastal elevations in the Atlantic. Remnants of the ancient volcano are partially preserved in the southern and eastern flanks of the island (which retain altitudes between 500 and 700 meters above seas level). In addition to marine erosion, the island is constantly eroded by strong northeast and western winds. In the south, secondary cinder cones, such as Coroínha, Morro da Fonte, Grotão da Castelhana and Coroa do Pico, are visibly preserved with little erosion, and responsible for many basaltic flows that formed the southern lava fajã (10 to 60 meters above sea level). The last eruption took place about 80-100,000 years ago in the vicinity of Vila Nova do Corvo.

In the extreme northeast, along the Ponta Torrais there are two small islets, Ilhéu dos Torrais and the Ilhéu do Torrão, in addition to several submarine reefs, that are dangerous to navigation. At the end of October 2012, following several days of excess rainfall, a landslide occurred that dislodged geological debris along the northwestern corner of the island, resulting in the formation of small islets, that progressively transformed into peninsula and, finally fajã.

Dairy production is the primary activity, and cheese is one of the primary commercialized products, although the raising of pigs and poultry is also common. Until the 1960s, the raising of sheep and the commercialization of wool was also important on the island. This was until a change in forestry policy forced many farmers to vacate uncultivated lands, lands that were routinely used to graze sheep. It was quickly the end of the wool industry on the island, an industry that had been integral to the island’s small export industry.