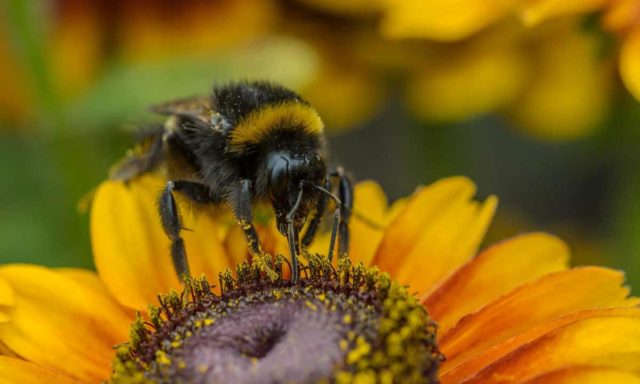 WHY ARE BEE NUMBERS DECLINING

If the bee disappeared off the face of the Earth, man would only have four years left to live.

The Centre for Ecology and Hydrology in Oxfordshire [has] studied data on 62 species collected by volunteers from more than 31,818 surveys across more than 4000 square kilometres of land.
They looked at bee populations between 1994 and 2011. In England, farmers first started using neonicotinoids on oilseed rape in 2002.
They found the average decline in populations across all bee species was 7 per cent since 2002. Some species, such the Bronze Furrow bee and the Spined Mason bee declined by 20 per cent or more.

The two main reasons for the decline in the bee population is habitat loss and the use of pesticides, namely neonicotinoids.

There is a temporary ban on the use of neonicotinoids in the UK while further tests are carried out.

Meanwhile, we can get on with the flowery business of improving habitat.

Plant diversity is often very low in agricultural land, and it has been shown that bee populations are much more stable when diversity is available.

Domestic gardens often have more bees and other pollinators than surrounding farms.

By setting aside space in our gardens for nectar and pollen-rich plants we can considerably improve the chances of stabilising the local populations of bees.

HOW BEES PLEASE CAN HELP

Bees Please provide packets of annual flower seeds that can be sown in April/May or late August/early September. Each packet contains 4 grams of seeds which is enough to easily cover two square meters.

Bees Please ship these out in minimum runs of 5000 and charge 65p per unit. Their sister company Higgledy Garden sells this seed mix at £1.95 per packet.

The packets can be printed to any design and can carry any message. They can organise a design for you or you can, of course, use your own design people.

These bee-friendly seeds have proved very popular with fundraisers. One of their clients has sold 100,000 packets in two years (with promotions running for just two weeks each year) with a guide price of £2.50. A third party dealt with the distribution, so the client didn’t have to handle that side of things or even take delivery of the seeds.

Another client, a restaurant chain, has given 5000 away to their customers as part of a drive to highlight their own sustainability policy and eco-credentials.

With your help, Bees Please are hoping to deliver one million packets of seeds to gardens throughout the UK in 2018.